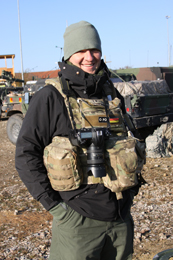 Born on 9 May 1975 in Coburg, Germany, Ralph holds a Masters degree in Architecture and is currently employed as a Senior Regional Account Manager for a corporate outsourcing company from the USA.

For several years Ralph has authored numerous reports and books for military publishers and magazines as a freelance journalist. He is well known for his outstanding knowledge about the Stryker Interim Armored Vehicle and has continously assisted the U.S. Army Europe and other NATO Armies by providing them with high-quality photographs for public relations and training purposes. Furthermore he has also worked as an author for various model magazines and technical consultant for model companies like AFV-Club, Dragon Models Ltd., Trumpeter, Eduard Model Accessories, AK-Interactive, ProArt Models and Voyager.

In May and June 2004, he has worked as an embedded journalist with the famous 1st U.S. Infantry Division “Big Red One” during Operation Iraqi Freedom. On 11 December 2012, he was appointed a Lieutenant in the Honorary Squadron of the Second Dragoons for his outstanding contribution to the 2nd Cavalry Regiment during numerous training events and exercises by Colonel Keith A. Barclay.